There are laws for a reason. Whether it’s to keep civilians safe or to ensure the ebb and flow of a peaceful city, there’s no doubt about it – laws serve a good purpose and wouldn’t be in place if they were not necessary. The same case applies to the helmet law.

Motorcycle helmet laws – as for any other rides like bicycles and electric scooters, for example – fall into the “keep civilians safe” category and can be very strict in some places. What are helmet safety laws like in the sunny state of Florida, though? If you’re wondering that very question, we have the answers.

The History of Motorcycle Helmet Laws

Helmets, despite their basic – and important – function, have had a pretty rough go of things. Here’s a quick timeline.

On May 19, 1935, T.E. Lawrence, an English man, succumbed to head injuries as a result of swerving off the road to avoid colliding with two boys on their bicycles. Hugh Cairns, one of Lawrence’s medics, began researching head injuries in motorcyclists and their prevention. He published a report in the British Medical Journal on the subject, roughly four years after the death of Lawrence.

Professor C.F. Lombard, as a result of the increasing number of motorcycle-related deaths, designs the first shock-absorbing helmet. It was made up of a hard outer shell and double layers of padding, one for comfort and the other to absorb shock.  After this invention, companies designing and producing helmets popped up in various locations.

The establishing of the Snell Memorial Foundation (1957)

In 1961, a law was passed in Australia that made it mandatory for motorcyclists to wear a helmet. Elsewhere in the world, no such laws existed. Reportedly, people outside of Australia were against wearing helmets because they were considered by many to be uncool or ugly.

Following Australia’s lead in the early 1970s, the United States creates a law called the Highway Safety Act. This law requires all states to have some sort of helmet law in place. Interestingly enough, the federal government enforced this rule by withholding funding for highway maintenance if a state failed to comply with the helmet regulations. The American National Safety Standard for Motorcycle Helmets was also established this year.

Bell launched the first full-face helmet. The US Department of Transportation issued a law holding all helmet manufacturers to strict standards. Helmets that did not meet said standards would not be released to the public.

1975 saw the motorcycle safety issue take a step backward in the United States. Many states, after Congress revoked the 1966 laws, made the use of helmets optional.

Helmet manufacturing did not halt. However, the popularity of helmets decreased a great deal in 2012 and the following years. With this, the rate of motorcycle-related deaths increased. During this time, high-tech helmets with built-in GPS were also created.

Helmet Laws in the US

The 50 states have very different helmet laws, with most of them having what we consider “partial laws.” Let’s go a bit deeper into the specifications.

Surprisingly, only 19 states require helmets to be worn. These states include Washington (DC and State), Virginia, California. Nebraska, Georgia, and Alabama, as well as others. These states require all riders of motorcycles, bicycles, electric scooters, and other motorized personal transportation to wear a helmet at all times.

This law applies regardless of the age of the rider or whether they are the driver or a passenger. Failing to adhere to this law can mean a costly fine or the revoking of a rider’s license.

28 of the 50 states require certain riders to wear helmets. In all 28 of these states, those under the age of 18 are required to wear helmets. In certain states such as Michigan, Connecticut, and Arkansas, this age specification extends to those 21 and under. In the states that allow for helmets to be optional, some restrictions do apply.

For example, by law, some states require riders who ride helmetless to have a minimum amount of health insurance so that they would be covered should something happen to them while riding without a helmet.

One good thing, regardless of a large number of states where helmets are optional, is that there are only three states that lack any form of a helmet law. These states are Illinois, Iowa, and New Hampshire. Here, there is nothing that regulates who wears or doesn’t wear a helmet, and there is nothing to specify how much medical coverage a rider or passenger should have.

Florida is one of the states we spoke of that have partial (or “optional”) helmet laws. Specifically, Florida’s helmet laws only apply to those under the age of 21. Anyone over the age of majority, which is, indeed, 21, is essentially able to make their own decision regarding the issue.

However, the law does specify that only those who have insurance coverage of over $10,000 in medical benefits can legally not to wear a helmet. This specification makes Florida, alongside Michigan, one of only two states to require medical coverage.

It’s crazy to think that helmets, in many places, aren’t a requirement. They serve such a critical purpose and, when used correctly, can save lives. While the United States has varying helmet laws across its 50 regions, other countries and nations such as Canada have country-wide mandatory helmet regulations. 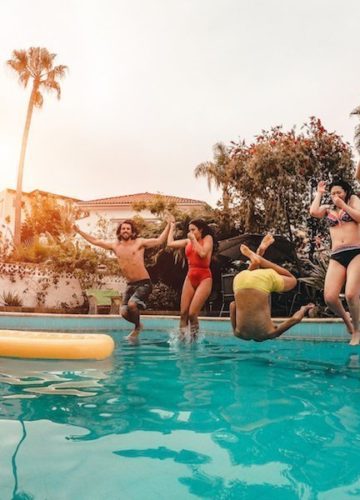 Canoe Rental in Central Florida. A Great Way to Enjoy the Waters in Every Season